On 9 September the Monte San Martino Trust published the first version in English that tells the story of the mass escape of prisoners of war from a camp at Fontanellato, Italy, from the perspectives of both the PoWs and the local Italian community. 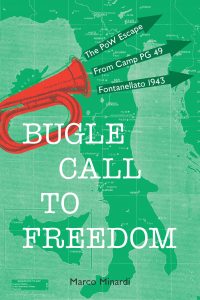 Entitled Bugle Call to Freedom, it is a translation of L’Orizzonte del Campo, by Marco Minardi, who specialises in the history of fascism and Italy’s liberation struggle. Bugle Call, which is priced at £10, will be available from Amazon and all bookshops. Proceeds will go to the MSMT. Details of the publication, which took place on the 77th anniversary of the mass escape on 9 September 1943, are in the pdf below.

Dr. Minardi’s book has been translated by John Simkins, the Trust’s administrator. He is the son of Captain Anthony Simkins, an inmate at PG 49 Fontanellato, near Parma. The book was produced by Christopher Woodhead, the grandson of Lt. Col. Hugo de Burgh, who was the camp’s Senior British Officer. The team also comprised Rossella Ruggeri, one of the Trust’s representatives in Italy, and Julia MacKenzie, who worked on editorial matters and checked the text against original English sources, particularly those in the National Archives at Kew.

The Trust was keen to make Dr. Minardi’s book accessible to English readers. Besides quoting from the memoirs of several of the PoWs, it describes the reaction of the neighbouring population to the escape, the local resistance and the tragedies that overcame some of the Italian families who hid the escaped prisoners. Bugle Call is a revised and updated edition of L’Orizzonte, containing extra maps and illustrations. These include remarkable drawings of the camp and its inmates made at the time by one of the prisoners, Lt. Mike Goldingham.

The 600 PoWs, mostly officers, were enabled to escape by the camp’s Italian commandant, Eugenio Vicedomini, the day after the announcement that Italy had surrendered and made an armistice with the Allies. His action in cutting the camp’s wire came shortly before the Germans, the country’s occupiers, arrived to transport the prisoners to Germany. For the first few days the prisoners hid nearby, before dispersing in small groups. They were brought food and clothing by the people of Fontanellato in an act of generosity and bravery that set the tone for the following months, when thousands of escaped prisoners from camps throughout north Italy were on the run and dependent on the mercy of the contadini, the peasant farmers, in the mountains.

The Trust’s publication of Bugle Call fits with its focus on research into the history of the Allied presence in wartime Italy. There is still much to explore. The Trust is undertaking a research project with Istituto Nazionale Ferruccio Parri, which is based in Milan and co-ordinates a network of over 50 historical institutes throughout Italy.

Dr. Minardi is director of the Parma historical institute. A short video interview with him, conducted by Paola Bondani in English, is available at https://www.youtube.com/watch?v=I5BEjLnJdrA&feature=youtu.be

Book details are in the pdf below.