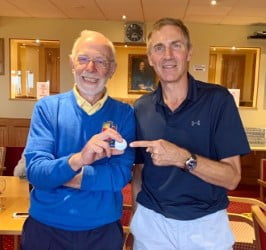 The son of an escaped prisoner of war in Italy has generously used his love of golf to raise money for the Monte San Martino Trust.

Graham Jones, the captain of Sudbury Golf Club, Wembley, kindly chose the Trust as his Captain’s charity during 2020. The club is in its centenary year and has a course designed by Harry Colt, the famous course architect.

On 8 July, at 5 a.m. Graham set off with his vice-captain, Dave Alder, on a sponsored challenge to complete 72 holes (four rounds of golf) in one day. It was a fitting challenge, as Graham is 72 years old. 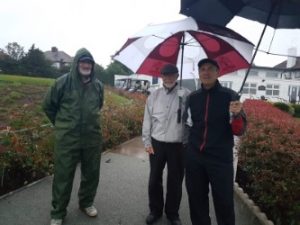 “When we rolled up the weather signs weren’t great but after that we only had short, sharp showers,” said Graham. The two men walked the course but had caddies carrying their clubs. They rested for half an hour between rounds and completed the 72nd hole at 7 p.m.  Within a couple of days club members, families and friends had contributed £3,000, easily surpassing the target of £2,000.

Both Graham and Dave are good golfers, playing off handicaps of nine and eight respectively. Dave lost one golf ball but Graham kept his specially commissioned Titleist 72 ball out of trouble throughout the 72 holes. He finished with a birdie (one shot better than par) on the final hole. Their eclectic score (the lowest number of shots by either of them on each hole) was one under par over the 72 holes. 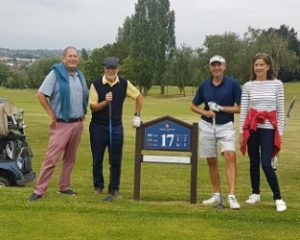 “Club members were really interested to learn about the Monte San Martino Trust and like what it is doing,” said Graham. Over the years, he and his brother, Peter, have researched the Second World war experiences of their father, Corporal Albert Jones, using Albert’s diary, written in a school exercise book. Albert was captured in Libya and transported to Italy. In September 1943 he escaped from Camp 59 Sforzacosta in the north-east region of Le Marche. He was given sanctuary by the Marzialetti family, with whom he lived for 11 months. In July 1944, Albert was officially reported as safe in Allied hands in southern Italy.

In 2011, Peter tracked down the Marzialetti family with the help of Antonio Millozzi, the Trust’s representative in Italy, and his son, Giuseppe. Peter then did further research. The families have remained in contact.