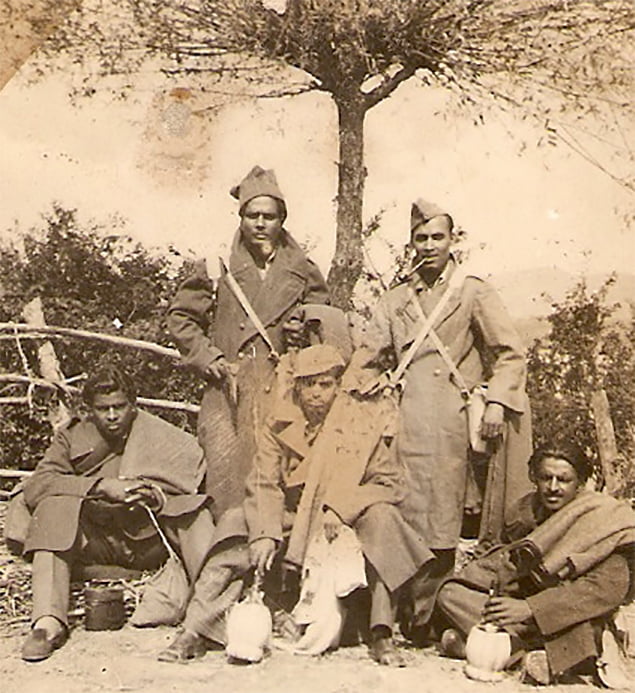 Annu Palakunnathu Matthew, Professor of Art (photography) at the University of Rhode Island, USA, conducts research into the experiences of Indian soldiers who became prisoners of war in Italy while fighting for the Allies. In this article, written for the Monte San Martino Trust in 2020, she explains how she came across their stories of imprisonment and escape. She would like more stories and photos of Indian PoWs and can be contacted at indiansoldiers1945@gmail.com

Did you know that nearly 50,000 Indians (South Asians) fought in Italy during the Second World War? And that some of them were PoWs in Italy? The sacrifice of Indian soldiers is an extraordinary, largely forgotten story.
The fact is that 2.5 million Indians volunteered to fight for the British during the Second World War and over 87,000 died. The tenacity of the Indian troops during the Italian campaign is reflected by the fact that 30 per cent of the Victoria Crosses conferred in Italy were awarded to Indians.

In my artwork, I pull back the veil on these forgotten histories. The stories of the array of different heroes are important and powerful. They give us hope for humanity. My visual artwork has always been about taking these kinds of human stories and making them accessible to larger audiences. When I was serendipitously introduced to this under-appreciated history, I was astounded to learn that this was not part of our history books in India (or globally.) Why does this story not belong to our larger narrative, especially because the war was truly global? As Yasmin Khan wrote in India at War, “Britain didn’t fight the Second World War, the British Empire did”.

This is how I stumbled on the stories of Indian PoW’s in Italy and the Italian families who sheltered them:

In December 2018, a friend learned through social media that I was exhibiting at the Kochi-Muziris Biennale in India. The installation focused on the Indian soldiers who fought in the Italian campaign of the Second World War. (http://www.annumatthew.com/gallery/unremembered/). In response, she sent me a photograph of her grandfather, Lt. Col. Goal Chakraborty, posing casually in front of the Leaning Tower of Pisa in his army uniform. The photo was from when he served in Italy during the war.

The striking photograph gave me an instant visceral connection to one of these 2.5 million Indian soldiers. This has led me down a “rabbit hole” of sorts, to where I have been crowdsourcing and collecting family photos and stories of some of these Indian soldiers. I completed a six-month Fulbright fellowship in India, collecting stories and over 300 poignant images of these unheralded people (mostly men) who fought for the British and, by extension, for the Allies. One of those stories was about a soldier who came home from the battle of Monte Cassino to find that his wife had remarried. She thought he had died.

Two of the stories I came across were of Indian PoWs in Italy who managed to escape and were sheltered by Italian strangers, who saved their lives. Both are testaments to our shared humanity. The Italian families looked beyond ethnicity and language and instead focused on the commonality of what makes us human. Lt. D. S. Kalha, a Sikh, was one such soldier.

He had to leave his wife of six weeks to fight in the war. He was captured at the siege of Tobruk (Libya) in 1941 and sent to the PoW camp in Avezzano, Italy. The soldiers guarding the camp were very young, many in their teens. From the stories told to his children, for the first three days he and his fellow soldiers were not given any food and barely any water. Italians would often come to the camp’s boundary walls and try to interact with the prisoners.

One such person was an Italian contractor whose family were farmers, Fabriani Domenico (this is gleaned from the documents I scanned from his daughter). He convinced Kalha that learning Italian was essential to be able to escape. So Kalha picked up a smattering of Italian during his time at the camp. Unfortunately, Kalha’s first attempt to escape failed. His second attempt was during the summer of 1943. He escaped with his friend Sandhu and with the help of a doctor where they were admitted to a hospital run by Catholic nuns. Here, Kalha was convinced to cut his hair (which Sikh’s usually never do) to pass as an Italian.  The nuns then helped facilitated his escape. Fabriani Domenico with his wife (Aida) and children (Lola, Gianni and Patrizia) shared their limited food with the two soldiers and sheltered them in a cowshed in winter and in a nearby cave during the summer. When Kalha and Sandhu got news that the Allies had advanced in Italy, they walked for hours and were able to join the New Zealand regiment who gave them uniforms and arranged for their return to India. Kalha became a Lieutenant-General in the army of independent India. His gratefulness and friendship with Fabriani Domenico and his family continued, and they corresponded (in Italian) for decades until Lieutenant General Kalha passed away.  His daughter, Avjit, visited Avezzano in 1984 and met 90-year-old Giovanni, who remembered her father well. He showed her the cowshed where her father had hidden.

The second story, one of the most powerful ones that I encountered, was about five PoWs: Chacko, D’Souza, R. G. Salvi and the brothers Sharafat Ali and Murrafat Ali. They also escaped from Avezzano. When the Italians signed the Armistice with the Allies in September 1943, the camp’s Italian guards disbanded and a number of PoWs fled before the Germans took over. The five men were tasked by the German soldiers with capturing escaped prisoners and bringing them back. But they decided to escape themselves. They walked all night following a railway line, hoping it would lead towards Rome. After over four hours they were exhausted and were about to sleep in a ditch when they heard the early-morning chime of church bells.

Realising that there was a village nearby, they pushed on and discovered Villa San Sebastiano. One of the Indians spoke Italian and was able to convince an Italian soldier, Romano Berardo (who had just deserted his army unit and was returning to his home in Villa San Sebastiano), to shelter them. The men were also helped by Adelina Piacente, Sirio Valente, Ederlo Antonelli and their families.

The PoWs’ ordeal lasted over a year but their lives were saved. They had to hide in animals’ sheds and caves, even in the bitter cold of winter. The Italians smuggled food to them, at the risk of death. Salvi even climbed up a hot chimney to avoid the threat of being discovered by Germans patrolling the village.

But the Indians also made deep connections and friendships that continued after the war. Salvi and his wife Hansa came back to meet and thank his Italian friends in the village. All of this is chronicled in the book Whom Enemies Sheltered, by Lt. Salvi, which has been translated into Italian.
Salvi’s grandson, Samar, was captivated as a young boy by these stories and he always wanted to visit the village to meet the people who had saved his grandfather’s life. Nearly 70 years later, in 2010, he had that opportunity, while living in England. There, he fortuitously met Luciano Gargano
(who later translated Salvi’s book) and who helped him to meet Adelina, Sirio, Ederlo and the children of Romano, the Italian soldier. In 2011, Samar and his extended family visited the village where they were welcomed warmly, Italian style! The Salvi family installed a plaque thanking the village and especially the families who had helped their father/grandfather. It ended with the words: “Without your loving help to Lieutenant R. G. Salvi, we would not have existed.”