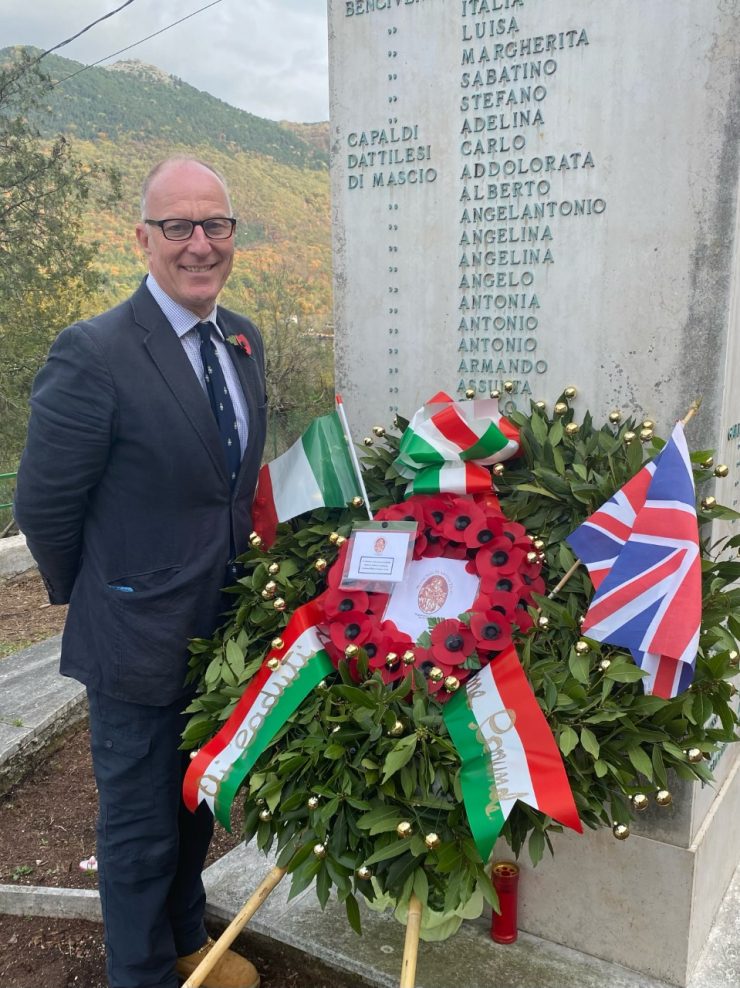 A Remembrance wreath was laid on November 11 2021 in Collelungo, in the province of Caserta, to honour villagers who paid with their lives for giving refuge to an escaped Allied prisoner of war.

The wreath was laid on behalf of the Monte San Martino Trust by Col. Sebastian Pollington, who lives in Naples and works with UK Defence for Nato. Col. Pollington wished to honour the many brave Italians who sheltered PoWs on the run throughout Italy – and nowhere is more appropriate than in Collelungo where dreadful events unfolded on 28 December 1943.

Shortly before that date the villagers of Collelungo, who themselves had fled from the town of Cardito to escape bitter fighting in the area, had rescued Lt Alfred (John) Burnford, a Royal Marine who arrived exhausted after three months on the run. Burnford had escaped from a train taking him to Austria and then made his way south on foot.

Burnford’s last memory before he collapsed had been calling for help from a group of frightened old men, women and children. When he awoke, standing over him was a young peasant woman, holding a baby and talking in a Glaswegian accent. She was British-born and named Angelina di Mascio. She helped Burnford dig out a den. When he recovered he moved on and successfully rejoined the Allies. Back in Britain, he travelled to Glasgow to tell Angelina’s family that she was well.

Tragically, in the meantime, Angelina had suffered an appalling fate. She, her husband and four children, together with 36 compatriots, were machine-gunned by Germans. The massacre was witnessed by a child who then hid in Burnford’s den. It seems that the reason for the killing was that the villagers had assisted Burnford.

Burnford became a doctor after the war and in his old age lived in Cambridge. He pleaded for official recognition of the villagers’ bravery but the event was overshadowed by memories of the battle at nearby Monte Cassino.

The full story can be read on the Trust’s digital archive at https://archives.msmtrust.org.uk/pow-index-2/burnford-alfred/