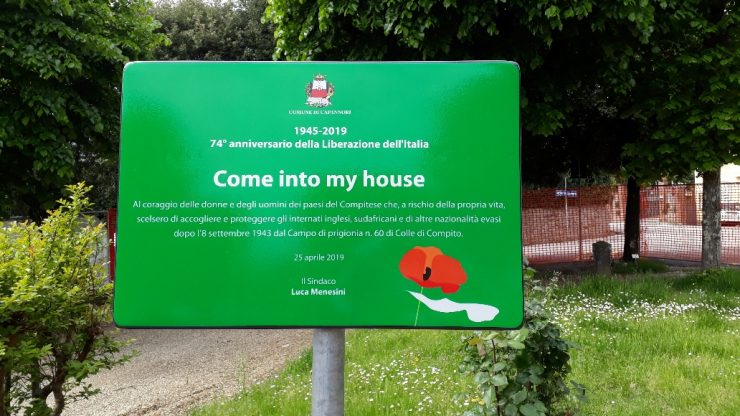 On April 25th, 2019, Capannori, a large comune of 40 villages just south of Lucca, focused its annual commemoration of the Liberation of Italy on the events of September 1943 at the prisoner of war camp (PG60) on its territory.

The story is little known outside the province. Some 4,000 Imperial PoWs, many of them colonial troops, were held in harsh, unhealthy conditions on malarial swampland. On September 10th, following Italy’s surrender, the Germans arrived to take over the camp. The Italian commandant Cione had received no clear orders from his superiors and refused to hand it over. The Germans responded with a burst of gunfire that killed him and two others. In the resulting confusion and shooting, the PoWs broke out en masse.

Despite the German threats and real risk of violent retribution, the people of the surrounding villages took most of these PoWs into their homes.

The commemoration ceremony at Colle di Compito in the comune celebrated the courage of its inhabitants with the erection of a memorial panel. The panel is part of a local educational initiative called “Come into my house” (the title is in English) which has produced a comic book and a students’ film-making programme. It is being used in secondary and middle schools in the comune to explore how this story can continue to bring inspiration today.