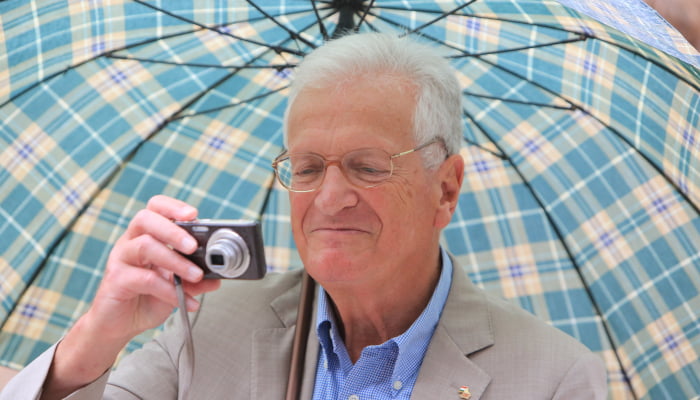 Vanni Treves, who died on 10th November 2019, had, in his own words, a start to life that was “not terribly auspicious”. He overcame that to become a highly successful lawyer, businessman and chairman of several public bodies. He found the time, too, to serve as a trustee of the Monte San Martino Trust, notably as chairman of its fund-raising committee between 2012 and 2016.

Drawing on his extensive contact list and using his formidable powers of charm and persuasion, he was instrumental in raising £1m, thus securing the long-term future of MSMT’s programme of study bursaries for young Italians. Vanni forged important ties for MSMT with the Italian embassy in London and his contribution to Anglo-Italian relations was recognised by the republic of Italy conferring on him the honour of Cavaliere Ufficiale.

Vanni’s passionate support of MSMT and its mission to give something back to the Italian people who had bravely sheltered escaping Allied prisoners during the Second World War did in fact owe much to his start in life. His father was an Italian Jew who, despite being a patriot and completely assimilated into Italian life, fell foul of the racial laws introduced in Italy in 1943. Banned from the army in which he had served and forced to leave his university in Florence because he could not teach, he joined the partisans. Eventually he was killed in Florence while with the Eighth Army. Meanwhile, Vanni and his mother were on the run, moving from place to place.

In 1946, Vanni’s mother met and married an English businessman and the family moved to London. Vanni won a scholarship to St Paul’s School, London, and studied law at University College, Oxford. Upon graduating he joined the City law firm of Macfarlanes but delayed his entry for a year to take up a Fulbright scholarship, studying at the University of Illinois. Having settled in the UK, he relinquished his dual Italian-British nationality because he would have been required to serve in the Italian armed forces.

During his career at Macfarlanes, which ended in 2002 and where he became senior partner, Vanni became a specialist in corporate governance and a non-executive governor on an array of quoted companies. Upon leaving Macfarlanes he became chairman of Korn Ferry, the organisational consulting firm.

In an interview in 2016 with Martlet, University College’s magazine, he described his chairmanship of the stricken Equitable Life insurance company as his most challenging task. The firm, which had £30bn of assets and more than a million policy-holders, was almost insolvent and the board had been removed. Upon his arrival in 2001 Vanni appointed a new board. “Many of those eight and a half years were terrifyingly difficult,” he told Martlet.

Other roles undertaken by Vanni included the chairmanship of Channel 4, London Business School and the National College for School Leadership. He was appointed CBE in 2012 for services to education.

Vanni cared deeply about giving opportunities to the less fortunate and his involvement in a number of charities gave him great pleasure. He raised money for the NSPCC and Sadler’s Wells and was a trustee of two large grant-making charities, the 29th May 1961 Charitable Trust and the J. Paul Getty Charitable Trust.

Vanni and his wife Angela had two sons and a daughter. In a letter to Nick Young, MSMT’s chairman, Angela wrote: “The connection with the Monte San Martino Trust gave Vanni the utmost pleasure. It ticked so many boxes and brought together so many strands of his life.”

The Daily Telegraph published an obituary of Vanni Treves on December 17th 2019, and The Times on January 2nd 2020.