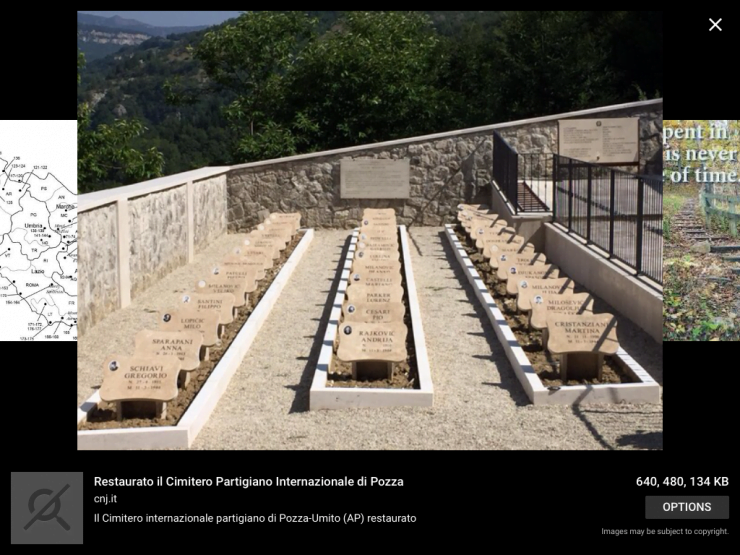 Italy is a land of many sad memorials recording the courage and sacrifice of Italians and other nationalities who fought and died in the struggle against NaziFascism during the Second World War, writes Anne Copley.

The Trust’s attention has been brought to one such site in Pozza in southern Le Marche.

It refers to the awful events of 11 March 1944, in which a band of Germans and Italian Fascists encircled and attacked the snowbound mountain villages of Pozza and Umito where the partisan band of Enrico Bianco was stationed. The attack started at dawn, and 11 houses in Pozza were burnt, with their occupants shot dead.

More would have died if the Germans had not received requests for help from comrades who had reached Umito, where they had found Banda Bianco ready to meet them. There was a violent clash, and the Germans lost about 30 men including their commander Rudolf Stegmeier. After he was mortally wounded his soldiers retreated, allowing Bianco’s men to disengage and climb the hill. The Germans then vented their anger on the civilian population, setting fire to the houses in Umito with bombs and flares. An eleven-months-old baby, Anna Sparapani, was burnt alive when her mother was unable to get back into the house to save her.

The number of civilians and partisans killed is put at between 30 and 40. Many were escaped PoWs, including 15 Yugoslavs and two Cypriots. Three were English-speakers, namely Sgt. Joseph Groves, 2nd Rgt Royal Horse Artillery; Sgt Peter Evans, 1st Bn Royal East Kent and WO Sidney Barker, Royal Canadian Air Force. Although their bodies were eventually removed to the Commonwealth War Graves site in Ancona, each is now also commemorated in a small cemetery in Pozza, along with comrades-in-arms of various nationalities.

The site was damaged in the 2016 earthquakes but has now been restored (see photo). It was discovered that the names of the three had been misspelt. The Aquasanta branch of the ANPI (Italian Partisans Association), wishes to supply new headstones with the correct details, at a cost of 1,100 euros plus VAT. The Trust has agreed to pay £600 towards the cost, with our sister organisation ELMS contributing the balance.