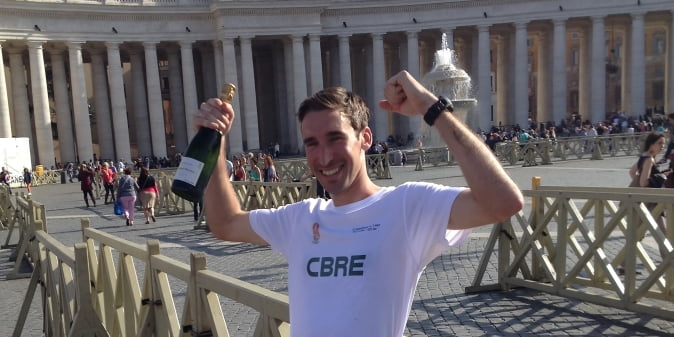 Family interest in the experiences of soldiers in the Second World War is no longer a case of “What did you do in the war, Daddy?” It now amounts to enduring curiosity about Grandfather, or Great-Grandfather.

Younger supporters of the Monte San Martino Trust are just as keen as older ones to learn about relatives who became Allied prisoners of war in Italy, and to further the Trust’s work in commemorating the bravery of the peasant farmers who sheltered escapers. Younger people are more adept at using social media and this can be a great weapon.

On Wednesday March 18th 2020 some Next Generation supporters are getting together after work to chat about Italy and the Trust over a few drinks in a relaxed atmosphere. Anybody interested, whether already a supporter or not, is welcome.

The term “Next Generation” is elastic! The meeting is being organised by Miles Skinner, who is in his early thirties and is the youngest of the MSMT trustees. Miles is the grandson of Stan Skinner, who was a PoW at Sulmona. When Miles was even younger than he is now, in 2015, he achieved the amazing feat of running from Lucca to the Vatican City in seven days – the equivalent of ten marathons. He raised £18,000 for the Trust.

People are invited to drop in at any time from 18.00 to 21.30 on March 18th at Market Hall, 9 Hollies Street, in central London. It is two minutes away from Oxford Circus Underground.

Anybody interested should email the Trust at info@msmtrust.org.uk. The message will be passed on to Miles Skinner.

“Next generation” supporters of the Trust are meeting up in London on March 18 to share their stories of grandfathers or great-grandfathers who fought in Italy during WW2.

Next Generation meets up

The Monte San Martino Trust remembers with great affection board member Vanni Treves, who died on November 10th 2019. The son of  an Italian partisan, he was a distinguished businessman and an indefatigable fund-raiser for MSMT

The Long Walk Home, the poignant story of two young escapers in wartime Italy, has been republished for the first time since 1952 in an expanded edition.

Translate »
We use cookies to ensure that we give you the best experience on our website. By continuing to use our site, you are agreeing to our use of cookies. You can change your cookie settings at any time if you want. Find out more.