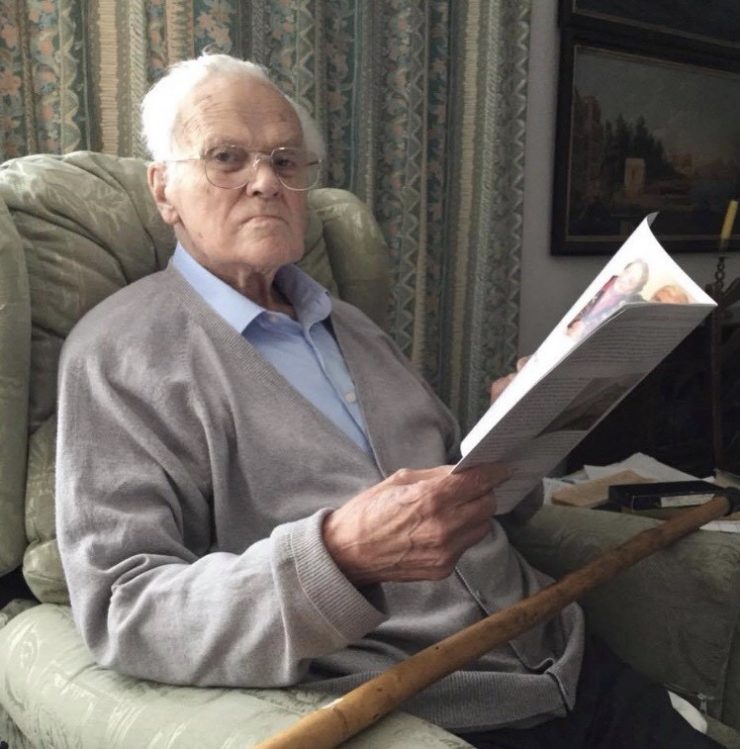 On May 16th, 2019, a small piazza in Monte San Martino was dedicated to the memory of the Trust’s founder. John Simkins reports on the ceremony.

One afternoon in 1961, Keith Killby got off the bus in Contrada Barchetta, a hamlet at Monte San Martino, and approached the first person he spotted – who, in fact, was named Vittorio Barchetta.

“He got my attention and asked me if I knew Maria Levi, and could I show him where she lived. She was my aunt. She had looked after Keith after he had escaped from Servigliano prisoner of war camp.

“I think that, at the moment that Keith knew he was safe, it was then that he thought of showing gratitude to those who had helped prisoners of war.”

Vittorio spoke these words on May 16th in a charming little piazza in Monte San Martino, known as a largo, which was on that day dedicated to the memory of Keith and given the name of Largo James Keith Killby.

Following that encounter with Vittorio, Keith used to return twice a year to the Tenna Valley in le Marche – “my valley” – until he became too old to do so. Keith died last year aged 102.

Among his many friends in the town was Antonio Millozzi, who helped Keith set up the Trust in 1989 and is still its representative in Italy. Speaking during the dedication ceremony, Antonio said: “I felt sympathetic to the cause as I was a war orphan – my father had died in Albania.” Since then the Trust has granted more than 600 study bursaries to young Italians as a way of thanking the contadini who gave refuge to escaping PoWs despite the risk of retaliation at the hands of the Germans and Italian Fascists. “Our citizens broke the laws without realising they were laying the foundations of Italy’s future constitution,” said Antonio.

Keith’s bond with Monte San Martino was recognised in 1988 when the town made him an honorary citizen. In 2001 he was awarded an OBE and in 2003 the Italian Republic conferred on him the honour of Cavaliere Ufficiale.

Another speaker at the ceremony was the mayor of Monte San Martino, Valeriano Ghezzi. “This is a moment that will remain in history for our small village. The gratitude expressed by the ex-prisoners of war for the help given by the people of this area will never be forgotten. I hope that the Trust’s activities will continue for decades.”

Returning the compliment, Nick Young, MSMT’s chairman, said: “Monte San Martino was so special to Keith, the first village he came to on his escape journey, the place where he first experienced the true spirit of St Martin himself – the soldier who shared his cloak with a poor and vulnerable stranger, and whose church we are standing in front of.

“You shared your cloaks, your food, your homes, your fragile security with Keith. You risked your lives for him. You gave him a whole lifetime of friendship. You were, in a very real sense, home for him.”

The audience at the ceremony included members of the Trust and the WW2 Escape Lines Memorial Society who were taking part in the annual Tenna Valley Freedom Trail, organised by ELMS. The day had begun with a group of walkers trekking from Servigliano, the Trail’s base, to join the inhabitants of Monte San Martino in laying wreaths at the war memorial. Following that, there was a magnificent lunch for about 75 people prepared by Paola Carraro and Fabiola Anselmi, president of the Pro Loco, the organisation that promotes the town. Then came the dedication service at the largo, which had been planned by Vittorio Barchetta, the mayor and Matteo Pompei, the cultural assessor.

All the ceremonies were accompanied by the beautiful playing of the Cassino Band of the Northumbria Army Cadet Force, which had driven out from the UK to play both on this occasion and at other moments during the four-day Freedom Trail.