The 30th anniversary of the founding of the Monte San Martino Trust was celebrated in fine style at MSMT’s annual lunch on 13th November 2019, held at the Royal Overseas League in London.

The centrepiece was a short film shown to the 117 guests, consisting of a series of interviews highlighting various aspects of the Trust and featuring former PoWs and some of MSMT’s representatives. Chief among the latter is Keith Killby, the founder. A strong theme of the occasion was to recall the achievements of Keith, who remained active within the Trust right up to his death, at the age of 102, in 2018. 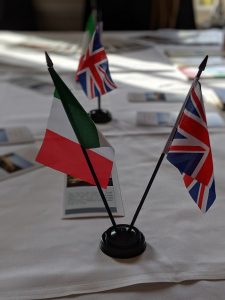 Welcoming the guests, who included several new supporters, Nick Young, the Trust’s chairman, pointed out that there was a box of matches beside each person’s place setting. These were produced for the centenary of Keith‘s meat business, PW & JK Killby Ltd, 1868–1968. “We found an amazingly large quantity of these in Keith’s flat along with 70 years of theatre programmes and complaint letters about practically every paving stone in Belsize Park,” said Nick.

A short silence was held to remember supporters who had passed away in the previous 12 months, including Bob Frost, a RAF rear gunner, whose partner, Mildred Schutz, who served in the SOE, was present at the lunch. Also remembered fondly were Frank Unwin, a former PoW, and Vanni Treves, a MSMT trustee who, as chairman of its fund-raising committee, almost single-handedly raised £1m.

Nick then introduced the guests of honour: Malcolm Angus and Lesley Angus, Keith’s nephew and niece: Keith’s cousin, Gill Langston and her husband Derek; Michael May, a relation of Keith, and Sue Martin, Keith’s cousin and goddaughter.

Guests with an Italian connection included Paolo Flores, who has helped supporters trace partisan families who protected their fathers; Paola Bondani, who leads walks in the Parma area in the footsteps of escaping prisoners; Nermina Delic, a former bursary student and now a Meeter of students coming to the UK; and Davide Montini, who was halfway through his four-week bursary course at Central School, London.

Nick signalled out for thanks Roger Stanton and Steve Sims of the WW2 Escape Lines Memorial Society (ELMS), with which MSMT is closely associated. ELMS organised the Freedom Trail in le Marche in May 2019, which coincided with the dedication in Monte San Martino of a piazza (Largo Keith Killby) to Keith’s memory. Keith hid nearby after his escape from Servigliano PoW camp and was devoted to the village, of which he became an honorary cittadino. “The village pulled out all the stops to welcome us,” said Nick. ELMS had brought out from the UK the Cassino Band of the Northumbria Army Cadet Force, at the head of which Nick had proudly marched. “A boyhood dream.”

Asked to say a few words, Malcolm Angus, who lives in New Zealand, said that, as someone who emigrated to Australia in 1964, he did not believe in hereditary entitlements and that to be a guest of honour was undeserved  – “the honours lie with the Trust”. He and his sister, Lesley, gave to Nick for the Trust three escape stories that Malcolm had found in New Zealand and which had not been in MSMT’s collection. He also presented gifts to Letitia Blake, the secretary, “for the love and care you gave to Keith”.

Thanking the trustees and supporters for all their efforts on behalf of MSMT, Malcolm said: “Keith had a vision, was obsessed by it and he made it work. It is extremely meaningful to me as his nephew to know it continues.”

Letitia then introduced the video about the Trust, made by film director Zak Jarvis, a MSMT supporter and the great-grandson of Ernest Day, a PoW at Gavi. Zak was assisted by Letitia and Anne Copley, a trustee. The film portrays the Trust’s mission to perfection. It can be watched at https://www.youtube.com/watch?v=C1fb8bhpDd4

After the viewing, Letitia thanked trustee Christine English, the “queen of the lunch”, for yet again organising the occasion so faultlessly. Calling for Three Cheers to the memory of the PoWs and the brave Italian contadini who sheltered escapers, Letitia pointed out that 13th November was “National Kindness Day” – an appropriate date on which to remember “the kindness of the Italians who saved our fathers”.