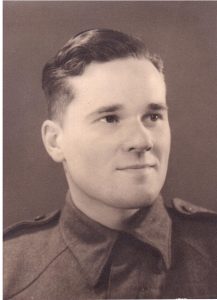 Keith Killby’s achievements, during a life of 102 years, were many and varied. A man of principle, with an iron will and a singularly individualistic outlook, he was at different times a soldier fighting unarmed, a proponent of European unity and a hard-headed businessman. All three identities then coalesced when he formed the Monte San Martino Trust in 1989, born out of his vision to nurture peace between former warring enemies and the desire to “give something back” to the brave Italian subsistence farmers, the contadini, who had protected escaping prisoners of war in Italy after the Armistice in September 1943.

It was a vision that he pursued doggedly and successfully during the last 30 years of his life, and although it should not crowd out the record of his earlier achievements, it was entirely appropriate that Keith should die, in his London flat, at the very moment that 90 supporters of the Trust were raising Three Cheers to him at a celebration in Fontanellato, near Parma, to acknowledge the 75th anniversary of the Armistice and the escape of 600 prisoners from the town’s PG49 Camp.

The events and interests of Keith’s earlier life gave him the ammunition for this vision. Born in Sydenham, south London, Keith came from a family of Smithfield butchers, and he spent a couple of years in his early-20s learning the meat trade in New Zealand, often on horseback. At the outset of the Second World War, determined to serve as a non-combatant given that he was a conscientious objector, he was assigned to the Medical Corps, which did not carry arms. Already, inspired by his pacificism, he had written a pamphlet entitled Peace – what then?

He was despatched to North Africa, with the 150th Field Ambulance Unit attached to the 50th Division. At a later stage, he volunteered as a medical orderly with the SAS. Captured during a raid in Sardinia, he was sent to the Italian mainland but was able to escape from the camp at Servigliano, in the north-east region the Marche, after the Armistice. He fell into German hands on a few occasions and was eventually sent to a camp at Moosburg in Bavaria, where he gave his first talk on European federalism.

After being liberated from his final PoW camp, in Silesia, Keith devoted the immediate post-war years to advocating European unity, giving talks and becoming secretary of the Federal Union. From 1954 onwards he resurrected the family business and became a regular visitor in his holidays to the Marche, forming close friendships with people in and around Monte San Martino, which is near Servigliano. It had been at the hamlet of Barchetta, the day after his escape, that he had first experienced the generosity of the contadini, when a woman named Maria Levi waded barefoot across a river to bring him a pot of pasta balanced on her head.

Friendships that he made, such as with Antonio Millozzi who was working for the local authority, and the Barchetta family who had sheltered him during the war, proved to be crucial. Thanks to money raised locally, it was made possible for a young man from Monte San Martino to travel to London for a kidney transplant and it was in the wake of this that the Trust was founded. If opportunities could be created for young people from different countries to get to know each other, Keith reasoned, then he would not only be “giving something back”, he would be furthering the cause of peace and understanding between peoples.

The idea of granting one-month bursaries to young Italians to study at language schools in the UK also met with an enthusiastic response in Britain from former prisoners of war. A number of them helped him establish the Trust. Altogether, there had been about 80,000 Allied prisoners in camps in Italy, most of them captured in North Africa. After the Armistice the Germans moved swiftly to put prisoners on trains to Germany. Accounts vary but approximately 30,000 went on the run before their camps were taken over, in an attempt to reach Allied Lines. A considerable number of these were recaptured but both those who succeeded, and those who did not, were profoundly grateful to the contadini in the mountains for hiding them away from the Germans and the Fascists.

The Trust took as its logo the image of St Martin, who shared his cloak with a beggar – an image symbolic of the farmers’ acts of spontaneous generosity in sharing with the escapers what little they themselves had. Antonio Millozzi became the Trust’s long-serving representative in Italy, responsible for recruiting the students. By the time of Keith’s death about 600 students had benefited from the bursaries, all funded by donations to the Trust which was staffed by volunteers conscripted by Keith.

Many of the young Italians who received awards were descendants of families who had helped PoWs, although this was not a condition. Coming from rural areas in regions where camps had been concentrated, such as Emilia-Romagna, the Marche and the Abruzzo, a bursary was often their first opportunity to travel outside Italy. Keith quickly established strong links with two language schools in Britain, at Wheatley, near Oxford, and at Tottenham Court Road, London, and he himself frequently entertained students at his own home. He insisted that Trust volunteers should meet students at their incoming airports.

Keith also encouraged veterans to write up their memoirs and gradually established, in his back bedroom, a trove of valuable accounts, which will continue to be of great service to family and academic researchers. The Trust also supported Freedom Trails along escape routes in Italy.
MSMT received encouragement from both British and Italian authorities and Keith himself was awarded the honour of OBE in 2001 and Cavaliere Ufficiale in 2003 by Britain and Italy respectively. He was also made an honorary citizen of Monte San Martino. His autobiography, In Combat, Unarmed, was published in 2013.

In the final years of a very long life, Keith stepped back from day-to-day administration of the Trust but continued to keep a close eye on it and watched it grow from strength to strength, as the children and grand-children of prisoners sought not only to discover more about the experiences of the often reticent veterans, but to connect with the families of their Italian saviours. Ill health compelled him to stop visiting Italy but he was looked after in London by his close friends Luigi Pighetti and Maurizo Pittacolo. With him in his last hours was the third member of his principal care team – Letitia Blake, secretary of the Trust, who over the previous 14 years had become an indispensable aide and dear friend, spending many hours with him and supporting his vagaries. Without her and the others Keith would have been unable to spend his last few years living in his London flat.
Keith requested that there be no funeral but the news of his passing prompted a flood of requests for there to be a celebration of his life.

Read an account by Letitia Blake, secretary of MSMT, about her 14-year friendship with Keith Killby

Read a tribute to Keith Killby by Sir Nick Young, chairman of MSMT, in the pdf below.

Read a tribute to Keith by his nephew Malcolm Angus below.

Below is a tribute to Keith by Antonio Millozzi, the Trust’s representative in Italy